Saskia is a painter and curator from New Orleans, La. She is the Founding Director of the non-profit Ozols Collection: A Museum of American Painting and Pedagogy,   https://ozolscollection.org/contact/ as well as the Institute for Fine Arts Practice, Research, and Preservation. The mission promotes the advancement of the Fine Arts as a vital learning tool that promotes intercultural discourse with a foundation in classical techniques and conversations.

Saskia has taught at Boston University, Tulane University, Loyola University as well as other smaller institutions.  She has painted and exhibited 15 solo shows, and numerous group exhibitions in cities including New Orleans, Boston, Philadelphia, New York, Moscow, and St. Petersburg, Russia. Her area of focus in research is Realism in visual art and its contemporary intersections. She holds an MFA from the Museum School of the Pennsylvania Academy of Fine Arts, and trained with painters including Sidney Goodman, Bo Bartlett, Vincent Desiderio, Nelson Shenks, Bruce Samuelson, Auseklis Ozols and others through direct artistic lineage of Thomas Eakins.

Research as an independent curator includes a two-year project at the Louisiana State Archives in Baton Rouge as Curator of Fine Arts for the exhibition 40 Days and 40 Nights, Exploring the Resiliency of Louisiana’s Visual Artists After Katrina; as Chief Curator for Winter Sun, Multi- Media Exhibition at Café Russe of the Ritz- Carlton in Moscow, Russia, 2015, and as Chief Curator and Juror for Persephone’s Garden, Images Inspired by Femininity and Its Transformative Creative Power. Her Most recent project was as Chief Curator for Responsorial: the Contemporary Dialectics of Misogyny, at New Orleans Academy of Fine Arts.

Publications authored include Realism, Classicism, and the Feminist Voice,” chosen for publication in the conference proceedings of the 2012 Representational Art Conference of 2012; regular contributions to the New Orleans Art Review from 2005-2008, and Art Voices Magazine from 2007-2008. Recent publications and presentations include Representational Art Conference and Figurative Art Convention, in Miami where she presented “Contrapposto and the Techctonics of Gender; “and the London Center for Interdisciplinary Studies’ conference on Slavonic and East European Studies where she presented “Beyond the Path of the Peredvishniki, Exploring Intersections in Manner, Means, and Method between Russian and American Realist Painting.”

Saskia is currently teaching painting and drawing at Loyola University, working on a new series of paintings, and organizing archiving and research projects for The Ozols Collection. https://ozolscollection.org/mission/

Publications About or Containing Images of My Paintings

Past Board and Elected Committee Memberships 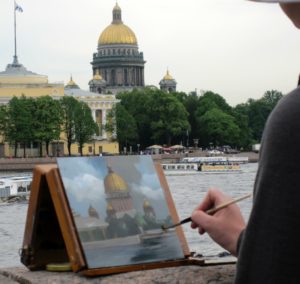 I see painting as a meditation: an exploration of relationships I encounter through observation and experience. I find greatest inspiration working from nature; considering innate dualities as they move through varied passages of color, meaning, and form. The resulting images reflect the search for beauty as a journey through the fluidity of perception, the passing of time, and the structure of change.

I have been painting my entire life. I began apprenticeship in classical technique when I was 5 years old. By the time I was nine I was assisting with all the details of preparation, creation and presentation of artwork. Many of my early foundational experiences growing up as the child of an artist made a significant impact on every professional and educational choice I have made.  What follows is a brief outline of experiences in the art world that made an impact on me and which are not addressed in my bio.

I learned to put words together properly, roller skate, and hold a paintbrush in the expansive magazine street space my parents christened as the New Orleans Academy of Fine Arts in 1978. I watched painting demonstrations, drawing marathons, and artist’s lively discussions. I watched every easel, drawing bench and palette being designed, sketched, and hand built or carved by my father, the Academy’s Founding Director.  He wanted everything to be perfect from ideology and curricula to the smallest detail of design.

Throughout my childhood I assisted with exhibition installation, planning and prep. I held hammers and offered nails, I swept the floor, and I arranged flowers for the exhibitions with my maternal grandmother. I was dropped off in the studios after school immediately following carpool and listened under the eaves as I attempted to do homework during the life drawing classes.

My first job was gallery sitting and answering questions about the classes and the sacred ideology of realism as my family presented it. Ideas handed down from teacher to student directly from the birthplace of American realist painting: The Museum of the Pennsylvania Academy of Fine Arts. My fluency with these techniques grew as reality materialized on canvases throughout my early childhood.

In A. Ozols’ studio on Girod street I washed brushes and stretched canvases, melted rabbit skin glue, varnished pictures, served cocktails, played on the etching press, and practiced painting. I watched and assisted with enormous murals, mixed colors, ground pigment by hand. I learned to wake up before dawn to arrive for plein air landscape so that we would witness the first rays of sun break the darkness.

In 1992 I began to apprentice in art conservation at a local French Quarter studio. I continued my study in a private AIC listed studio. I worked in both studios for a total of 5 years and added significantly to my understanding of oil painting technique and its history. I learned techniques for preserving, repairing and properly maintaining all structures associated with oil paintings and antique frames. Re-lining, stretching, surfaces preparation, recipes for glue, bole, processes for guilding, creating moulds, hand carving. I learned documentation and research (then done from the original Benezit books only published in French,) condition reporting, and collections management.

My first solo exhibition was reviewed in the local paper. I took my first art writing and research position creating wall text for works loaned by the Museum in an exhibit that demonstrated a pedagogical relationship with the ideals and mission of noafa.

I entered the Pennsylvania Academy of Fine Arts in 1997 to refine my approaches and learn from the source. I completed the historic four year studio program in Drawing and Painting, and completed a Master’s Degree in Fine Arts, Painting and Drawing. I worked my way through college in Philadelphia galleries and Museums. I won the historic Cresson European travelling scholarship. I travelled Europe with a paint box and no cell phone visiting all the major museums and doing plein air paintings of the cathedrals of Europe.

In 2008 I moved to Boston and began teaching at Boston University. I became involved with historic arts organizations I still feel fortunate to have been a part of. I was an active member of the Copley Society of Art where I exhibited for the entire duration I lived there, from 2008-2013. I was invited to sit on the Board and the Art Committee of the St. Botolph Club where I also had two exhibitions of my own work in 2012.

I moved to Moscow in 2013 immediately following the opening of a solo exhibition of new paintings in the Arts district of New Orleans. This Julia street gallery represented me  from 2007-2017. I lived there for three years and I continued curation projects and had my first solo museum exhibit at the Diaghilev Museum of Contemporary Art in St. Petersburg, Russia.

In New Orleans again in 2016, I began teaching at Tulane University (Painting and Drawing) , Loyola University Drawing, Painting, Art Collections Management, New Orleans Museums, Art Collections and Artists,)  and back at NOAFA (Materials and Techniques of Oil Painting, Introduction to Drawing, Figure Drawing, and Drawing the Antique: NOAFA at NOMA.)  All syllabi are original and based on my own research.

Being back in New Orleans has instilled me with a sense of gratitude for the valuable cultural resources I grew up with and re- invigorated my desire to preserve them. The techniques, processes and pedagogy of painting are my first language and have woven themselves throughout my very being.

SASKIA OZOLS EUBANKS Søren Christensen Gallery New Orleans, LA
“UPON ENTERING SASKIA Ozols Eubanks’ exhibition at the Søren Christensen Gallery, the visitor will be delighted to observe her overall understanding and usage of the elements and principles of art throughout her artworks. Eubanks, who trained at the New Orleans Academy of Fine Arts, earned an M.F.A. at the Pennsylvania Academy of Fine Arts, receiving solid instruction in both institutions. She uses the spectrum of artistic elements—line, shape, form, space, texture, value, and color—to her advantage. Eubanks’ works in this exhibition, although minimalist in some respects, are evident. More encouraging is her subtle employment of the principles of art: balance, emphasis, movement, pattern, repetition, proportion, rhythm, variety, and unity. The full range of elements was often deliberately ignored in minimalist works through the mid-20th century. Its reappearance in art of the past couple of decades is reassuring, and especially in this exhibition.

Eubanks has mastered the full run of traditional subjects: portraits, figure studies, landscapes, marine scenes, genre scenes, animal studies, and still lifes. Several paintings focus on mythology or the evolution or dissolution of living creatures, particular human beings. Eubanks mastery of anatomy in human figures, animals, and architectural structures is evident immediately in these paintings. Her bravura brushwork reveals an artist secure in her skills. Her paintings, without exception, are harmonious and well balanced….“
__________________
Read full review: Excerpt from Curator’s Statement by Tatiana Yurieva, Director of the Diaghilev Museum of Contemporary Art.

“Saskia explores fresh psychological reality with a particularly artistic flair, but more importantly she contemplates the internal world of the person within the person. Her paintings are replete with symbolic codes; she has mastered fundamental mythological and biblical themes, which she renders beautifully as archetypes that populate her life…”
__________________
Read full review: Published in Gambit Weekly, Written by Eric D. Bookhardt September 17, 2017

“The word “academic” can be treacherous when applied to art. In fact, academic art owes much of its problematic reputation to the Academy des Beaux-Arts in Paris, a fabled institution that held much of the art world in a death grip for centuries. Ranging from the lush neoclassicism of Ingres to the later 19th century romanticism of Delacroix and Bouguereau, academic artists stressed realistic technique, the more spectacular the better. Many also played to the crowd with bourgeois sentimentalism, which in the hands of a skilled yet sappy painter such as Bouguereau, resulted in a monumental sort of kitsch more sickening than a supertanker of saccharine.

In America, the academic epicenter was the Pennsylvania Academy of Fine Arts, a Philadelphia institution associated with such durable 19th century realists as Thomas Eakins and William Merritt Chase, painters whose cool circumspection astutely avoided most kitschy excess. It was, in fact, the Pennsylvania Academy that inspired painter Auseklis Ozols to found the New Orleans Academy of Fine Art in 1978. Since then, his NOAFA has reliably turned out accomplished artists, the best of whom transcend the pitfalls of the genre. Academic realism is challenging not just because it requires a high level of craft, but also because a related tendency to sometime overwork surfaces yields a technical polish that can seem lifeless or inert. Or as Cab Calloway so famously put it, “it don’t mean a thing if it ain’t got that swing.”

Two distinct approaches that avoid such pitfalls appear in the work of two artists who teach at the Academy but are showing elsewhere this month. Of late, Saskia Ozols has emerged as a painter skilled in academic techniques yet unafraid to take chances, as we see in her Poesis expo at Sören Christensen, where her treatment of the female form is sometimes more monumental than one might expect. “
Read full review.
__________________
Excerpt; From Gambit Weekly, written by Eric D. Bookhardt 2007 “…Unlike traditional academic nudes…this sort of works as a hybrid of classicism and neo-expressionism in a limbo where Thomas Eakins meets Susan Rothenberg. Similar tactics appear in Fight or Flight, a large painting of a horse that recalls Eakins’ animal locomotion studies set in a romantic charcoal fog — one of the most successful pieces in this promising if still somewhat experimental series.”
Read full review.